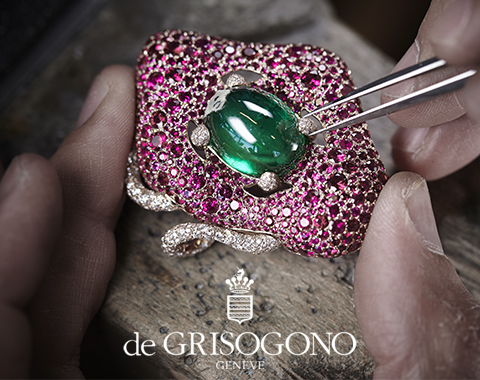 A brief history of disruption

Creativity is as precious an asset as the magnificent stones used by de GRISOGONO. Founded in 1993 in Geneva by Fawaz Grousi, de GRISOGONO has made its mark as a free-thinking and highly creative force in jewellery.

Over the past 26 years de GRISOGONO’s Creative Studio has dared to defy convention and turn the rule book of high jewellery on its head injecting a vibrant burst of life into the highest echelons of this privileged world. Distinctive to the point of audacity, de GRISOGONO’s designs drew a line in the sand and there was no turning back. As the driver of change, the most precious jewellery once again became relevant to a diverse and engaged audience who were rewriting the rules of luxury.

Ever daring to be different, de GRISOGONO’s outsized, highly-colourful and sensuous jewels exude a passion for selecting the finest materials brought together with the eye of an artist and the hand of the creator/jeweller. In its Geneva ateliers, each jewel is made with the most demanding manufacturing techniques and a respect for the noble arts of the goldsmith.